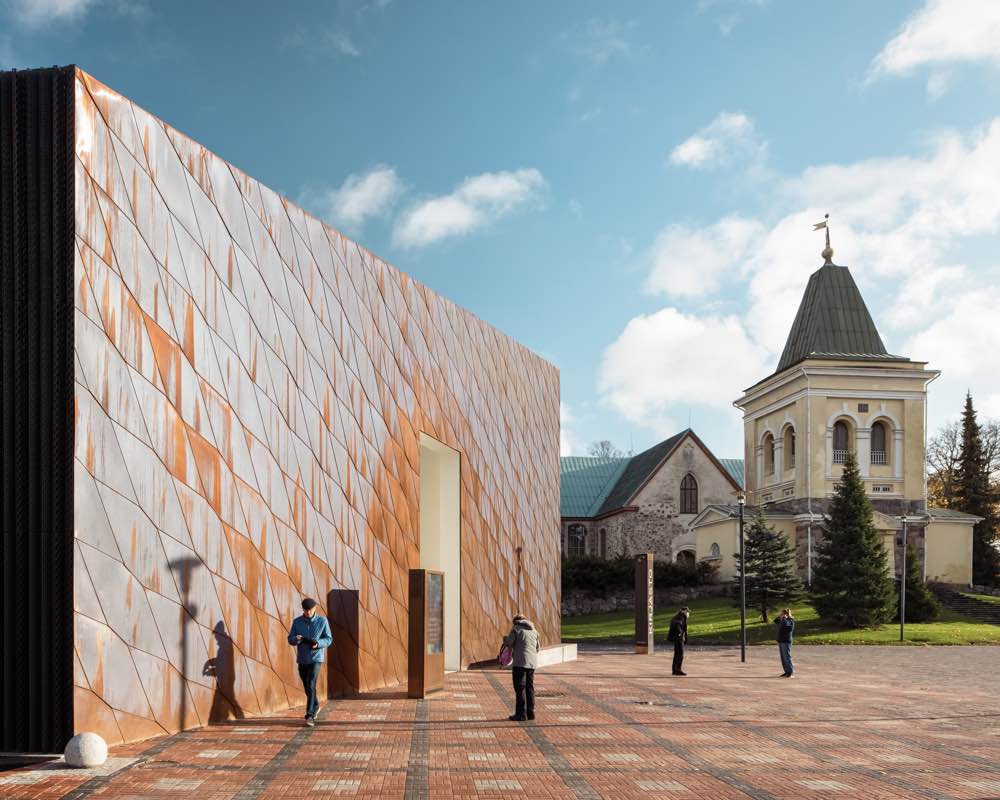 Fyyri Library in the Finnish town of Kirkkonummi

Helsinki-based JKMM Architects has renovated and extended a library named Fyyri in the Finnish town of Kirkkonummi. The studio doubled the size of the previous library and wrapped it entirely in a copper facade to create a counterpoint to the town’s medieval stone church. “The core urban concept was to design a modern counterpart to the neighboring medieval church,” said JKMM Architects founding partner Teemu Kurkela.

“Together the two public buildings form the heart and brain of the small city of Kirkkonummi,” he told Dezeen. “The architectural concept was to absorb the old library within the new internal spaces and behind a contemporary copper facade.” Both the original 1980s structure and the extension were wrapped in copper shingle cladding to create a unified appearance, which is captured in the film above created by Tapio Snellman. “Copper is a material, which has a very long life span,” said Kurkela. “Also, the neighboring medieval church has a copper roof, demonstrating how copper represents permanence in a cultural building,” he continued. “The shingle patterns may bring to mind maritime images of nets, which is also fitting for the city with its long beautiful sea coastline and heritage.”

A 50-metre long sheltered terrace was created at the front of the existing building facing the church, while the core of the extension is a large reading room that has slotted windows facing the same direction. Within the reading room, the fair-faced concrete posts and beams supporting the windows filter the light to create an effect described by the studio as “daylight rippling through a forest of trees.” Alongside the reading room, the 4,700-square-metre library contains a variety of community spaces including exhibition areas, spaces for events, rooms for toddlers and youth clubs as well as a large cafe.

“Kirkkonummi library is a truly multifunctional building, a community center that feels like a public living room for all the residents,” explained Kurkela. “Libraries are no longer focused on books, the contemporary idea is to bring people together under an umbrella of knowledge.”

JKMM Architects aimed to create a variety of spaces within the library to accommodate the building’s range of uses, with awkward spaces in the existing structure used to create more intimate spaces. Throughout the building, the interiors were finished with white walls combined with slatted timber walls and ceilings. Timber furnishings and felt upholstering in subdued colors complete the calm appearance.

“Fyyri’s interior was designed to be welcoming and also intimate in a way that enables everyone to find their rightful home in the building,” said JKMM’s interior architect Tiina Rytkonen. “By reusing the 1980s structure, the interior also has the sort of unanticipated spaces that come with working with older structures. There are cosy spaces and hideaways too, perfect for children’s stories.”

Yakety Yak Blog, mostly about cool libraries, furniture and design – keeping you abreast of our world. (Source: DeZeen. Photography by Tuomas Uusheimo unless otherwise stated. Video is by Tapio Snellman).