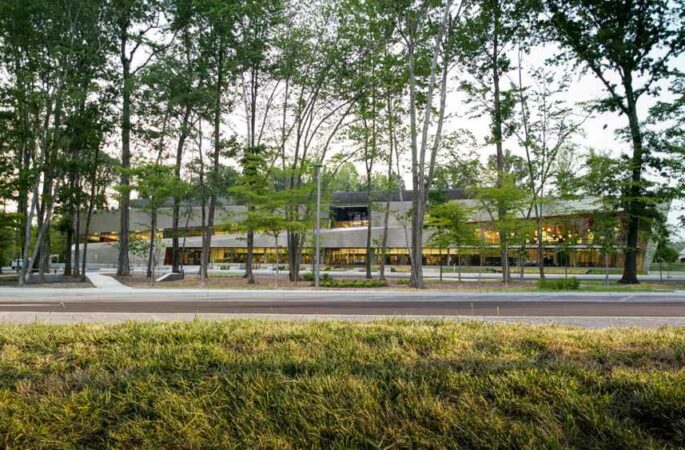 Kentucky library in a grove of trees

American studios MSR Design and JRA Architect have completed a public library in Louisville featuring a sculptural, medal-clad exterior that is partly concealed by tall, leafy trees. The South Central Regional Library is part of the Louisville Free Public Library system – the largest public library system in Kentucky. The project was designed by MSR Design, a Minneapolis studio, and local firm JRA Architects.

Designed to serve 160,000 patrons, the new facility replaces a much smaller library in the city’s Okolona neighborhood. It is the second library to be constructed as part of a 12-year masterplan developed by MSR Design. Tucked off an active street, the 38,191-square-foot (3,548-square-metre) building occupies a partly wooded site. Preserving the trees – along with harvesting daylight and conserving energy – were guiding concerns for the design team. Ultimately, a third of the site was left untouched.

“By delicately inserting the building into a grove of trees, the project stands out in a region of Kentucky where clear-cutting sites is standard practice,” the team said in a project description. Roughly trapezoidal in plan, the building has a sculptural form owing to angled walls and various cuts and overhangs. The main, south-facing elevation features large stretches of glass and stainless steel siding. Long strips of shiny metal streak across the main facade, giving the building a sense of energy and movement. The steel-clad elements also act as eaves, helping control how much daylight enters the building.

The north facade is more subdued, with dark stucco blending with the tree shadows cast upon the building. Inside, the library is dominated by a vast, open space with no columns and limited walls – a spatial approach that allows for adaptability. “This flexible, responsive organisation will allow the library to continue to meet the community’s needs well into the future,” the team said.

Despite the openness, there are distinct zones within the library. Among them is an area for teenagers, a community room, a flex studio for hands-on activities and a maker space, which houses the library’s artist-in-residence programme. The interior has a highly contemporary appearance. Sharp folds and slits in the all-white ceiling recall the building’s angular exterior. Beyond adding visual interest, the variations in the ceiling’s topography help delineate different programme areas.

The team employed a neutral colour palette, with pops of bright hues adding vibrancy to the space. Orange and reddish chairs are sprinkled throughout. Grey carpeting is accented with multi-coloured bands that evoke crosswalks. Shades of green are provided by the verdant trees that are visible through large windows. For visitors wanting to further connect with nature, the team incorporated outdoor reading and gathering areas.

The building has a number of sustainable elements that helped it earn LEED Gold certification from the US Green Building Council. These include a geothermal system and numerous strategies to reduce energy consumption. The design team emphasised that the new library is meant to serve as a community hub that will attract a diverse range of visitors. “The library’s innovative programme encourages interaction and engagement for people of all ages and backgrounds in lieu of simple transaction,” the team said. It seems to be working, as over 2,800 new library cards were issued within six months of the building’s opening.

Other recently completed libraries in North America include the West Loop Branch Library in Chicago by SOM, which involved the conversion of former industrial buildings, and Calgary’s New Central Library by Snøhetta and Dialog, which features a large wood-lined atrium. 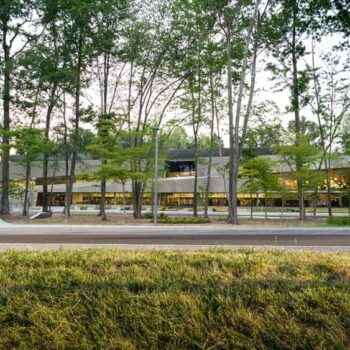 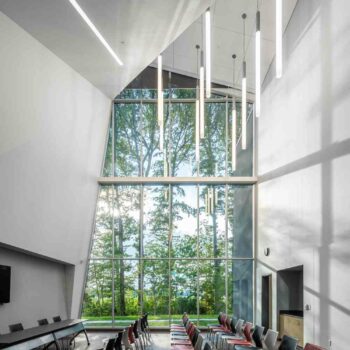