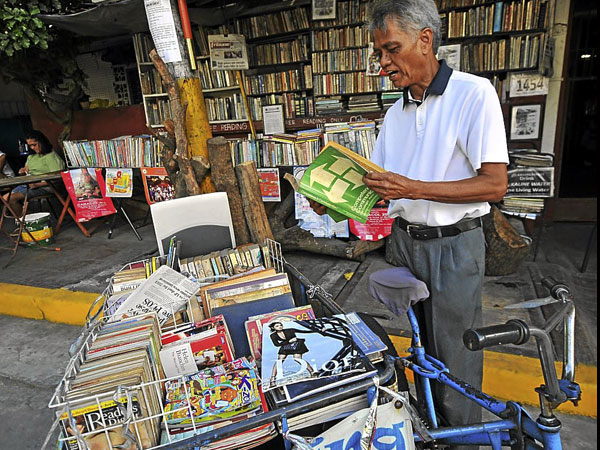 The man who turned his home into a public library

Hernando Guanlao is a sprightly man in his early 60s, with one abiding passion – books. They’re his pride and joy, which is just as well because, whether he likes it or not, they seem to be taking over his house. Guanlao, known by his nickname Nanie, has set up an informal library outside his home in central Manila, to encourage his local community to share his joy of reading.

The idea is simple. Readers can take as many books as they want, for as long as they want – even permanently. As Guanlao says: “The only rule is that there are no rules.” It’s a policy you might assume would end very quickly – with Guanlao having no books at all. But in fact, in the 12 years he’s been running his library – or, in his words, his book club – he’s found that his collection has grown rather than diminished, as more and more people donate to the cause.

“It seems to me that the books are speaking to me. That’s why it multiplies like that,” he says with a smile. “The books are telling me they want to be read… they want to be passed around.” Guanlao started his library in 2000, shortly after the death of his parents. He was looking for something to honour their memory, and that was when he hit upon the idea of promoting the reading habit he’d inherited.

“I saw my old textbooks upstairs and decided to come up with the concept of having the public use them,” he says. So he put the books – a collection of fewer than 100 – outside the door of his house to see if anyone wanted to borrow them. They did, and they brought the books back with others to add to the collection – and the library was born.

Such is the current turnover that Guanlao confesses he has no idea how many books are in his possession, but there are easily 2,000 or 3,000 on the shelves and in the boxes stacked outside his front door. And that’s before you move inside, where books are rapidly encroaching into every available space. You can hardly get into the front room, the car has long since been moved out of the garage, and books are even stacked all the way up the stairs.

The library is not advertised, but somehow, every day, a steady stream of people find their way there. On the day we visited, some shop assistants came to browse during their lunch break, a local man borrowed a weighty tome about the history of St John’s Gospel, and some schoolchildren picked up some textbooks – although I noticed they were taking some fashion magazines as well.

But it’s people like Celine who sustain the library. She lives down the road from Guanlao, and she arrived with two bulging bags of books – some of which she was returning, others of which she was planning to donate. She says she loves the concept of the library, because Filipinos – certainly those who are not particularly wealthy – have limited access to books.

“I haven’t been to any public libraries except the national library in Manila,” she says, explaining that it is quite far away – and it is not possible to borrow any books. If she wants to buy a book, the average price is about 300 pesos (£4.50, $7), she says. Imported books – especially children’s books – could easily be twice that amount. “Considering the income here, I think parents have other priorities,” she adds.

To help the poorest communities in Manila, Nanie Guanlao does not wait for them to find him – he goes to them, on his “book bike”, which has a large basket piled high with books. He’s also started to set his sights outside Manila. He’s already given several boxes of books to a man trying to set up a similar venture in Bicol province, a 10-hour drive from Manila, and his latest plan is to help a friend who wants to start up a library in the far south of the country. She wants to set up a “book boat”, travelling around the islands of Sulu and Basilan – an area better known as a hideout for separatist rebels than for any great access to literature.

As we sat outside Nanie Guanlao’s house in the midday sun, watching people browse through his collection, he tells me why he thought it was worth spending all his time – even to the point of giving up his job and surviving purely on his savings – to maintain the library.

“You don’t do justice to these books if you put them in a cabinet or a box,” he says. “A book should be used and reused. It has life, it has a message. “As a book caretaker, you become a full man.” 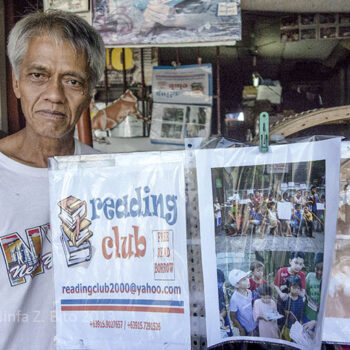 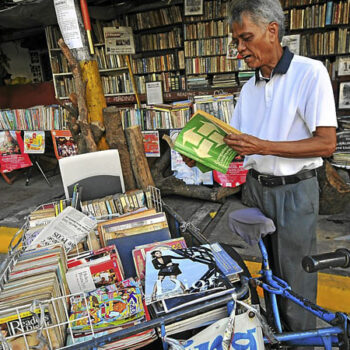