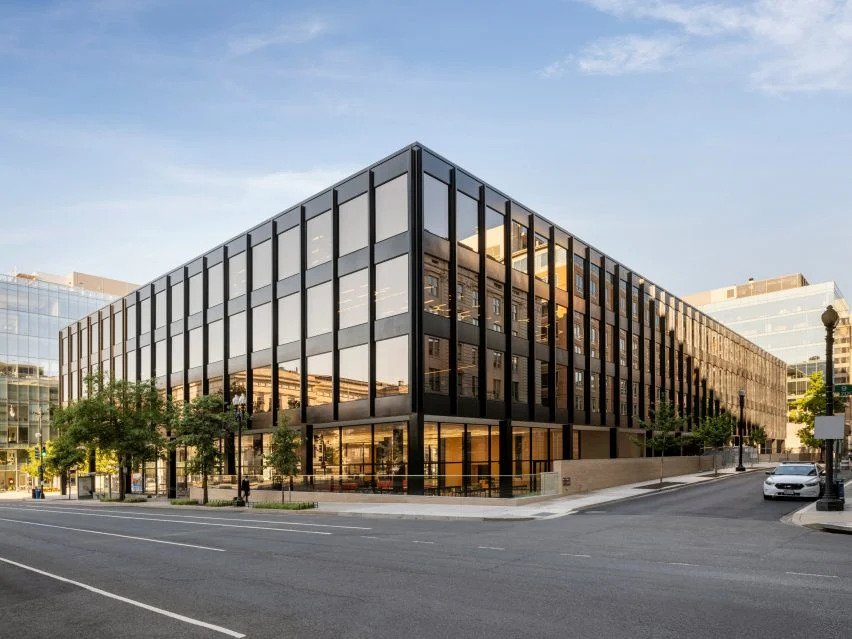 Architecture studios Mecanoo and OTJ Architects have added a rooftop garden and statement staircases to the Martin Luther King Jr Memorial Library in Washington DC, as part of its renovation of the Mies van der Rohe-designed building.

Dutch architecture office Mecanoo collaborated with New Orleans studio OTJ Architects for the project, which involved a three-year-long renovation of the library that is named after the American civil rights leader Martin Luther King Jr. The rectilinear black glass and steel building was the last building designed by renowned architect Ludwig Mies van der Rohe before his death and his only library.

According to Mecanoo and OTJ Architects, the renovation intended to balance preserving the original building, which opened in 1972, with creating more open, active spaces. “Mies designed a passive library to sit and read in, but the reborn library is designed to be active, a place for doing and meeting,” said the studios.

“It now embodies the spirit of advancement, inclusivity and hope that Dr King brought to the nation. The introduction of organic surfaces and softer lines is a strong contrast to Mies’ strict hard-surfaced rectilinearity, but it creates synergy, not opposition, with the original building.”

In the main entrance lobby, named the Great Hall, the studios added vertical wooden slats to a recessed wall that is positioned underneath a mural painted by artist Don Miller that pays homage to the life of Martin Luther King Jr. In front of it is a set of bench steps that invite people to sit and which “highlight the library’s social gathering purpose”, according to the Mecanoo’s principal Francine Houben.

From the Great Hall the library’s three storeys of reading rooms on its upper floors are accessed by a pair of wood-lined sculptural staircases featuring terrazzo steps. A cafe was also added on the ground floor that opens out onto the street.

Mecanoo and OTJ Architects aimed to increase the amount of light and feeling of space in the reading rooms. In the Grand Reading Room on the building’s second floor the central area of ceiling was removed to create a double-height space and visually connect the room to the floor above. The studios also removed bookshelves that were previously placed against windows on all of the upper floors.

Below the main reading room, on the first floor, a colourful children’s library was created complete with a slide that was inserted to add a sense of fun. Above, on the third floor, an auditorium with curved wood-lined walls that can accommodate 291 people, was added.

On the building’s roof a glass-walled pavilion, which houses conference rooms, was added. It was designed not to be visible from the street and is surrounded by a rooftop garden complete with  geometric planters, benches and garden tables. “Set back from the edges, the pavilion is not visible from the street, from where the building’s profile and geometry look exactly as Mies designed it,” explained Mecanoo and OTJ Architects.

Opened to library users for the first time, the lower ground floor holds areas called the Fabrication Lab and the Studio Lab, which host noisy, hands-on workshops and activities including dance and yoga respectively.

Mecanoo was founded in the Netherlands in 1984, while US-based OTJ Architects was established in 2011. Previous public libraries designed by Mecanoo include an aluminium-clad library in Taiwan and the Macau Central Library, which features a light-filtering facade designed to open up like a book.