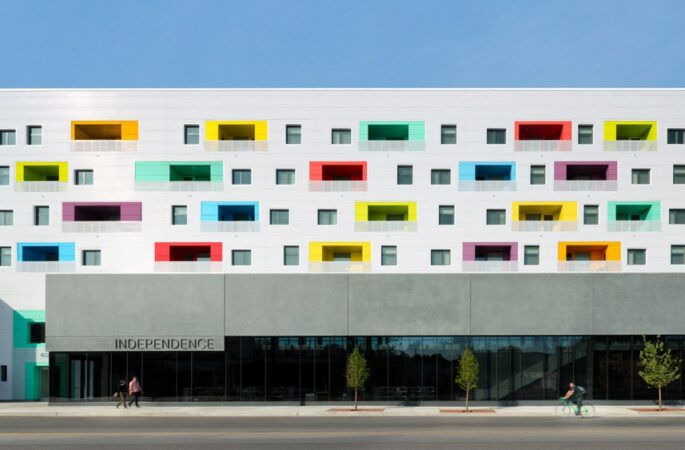 A spectrum of vivid hues were incorporated throughout a mixed-use building in Chicago by John Ronan Architects that contains a public library at ground level and low-cost senior housing up above.

The Independence Library and Apartments are located in the Irving Park district on the city’s Northwest Side. The area features a mix of historic and contemporary buildings, with many houses dating to the late 19th century. Roughly rectangular in plan, the six-storey building sits along a major road. The lower part houses a two-storey public library that replaces a neighbourhood library that burned down several years ago. The upper portion contains 44 affordable apartments that are reserved for tenants aged 62 or older.

Rather than create one large block, the design team recessed the upper portion of the building. “The library element is slid forward on the site to foreground its public nature, while the residential block, which hovers above, is set back from the street,” the firm said. Different facade treatments also distinguish the two programmatic zones. The library is faced with dark grey concrete panels and large stretches of low-emissivity, charcoal-toned glass. Long, straight lines and a crisp silhouette characterise this portion of the building.

In contrast, the upper part has rounded corners and white facades wrapped in corrugated aluminium. Punctuating the exterior are different-sized windows and balconies painted a rainbow of colours, from tangerine to turquoise. The balconies do not follow a perfect grid, further enhancing the building’s exuberant appearance and setting it apart from other social housing in the US, which tends to be rigid and formulaic.

The balconies “speak to individuality amidst the collective, enabling residents to identify their house from the street in a conscious attempt to transcend the brutal pragmatism which has characterised Chicago’s past efforts in this area,” the studio said. Encompassing 44,000 square feet (4,088 square metres), the residential part of the building contains 36 one-bedroom apartments and eight two-bedroom units, along with a communal fitness room, laundry facility and management office.

All of the units are designated as affordable, and tenants must have incomes below 60 per cent of the area’s median income. Interior finishes are simple and cost-effective. The residences features vinyl-composite tile flooring and plastic-laminate cabinetry. Front doors are painted the same hue as the unit’s balcony.

Splashes of colour were also incorporated into the 16,000-square-foot (1,486 square-metre) library, which is designed to support all age groups. The ground level, which rises nearly 30 feet (nine metres), contains a children’s area and a large community room for meetings, lectures and other events. Concrete columns and flooring are contrasted with brightly coloured decor. A series of large, circular LED fixtures are suspended overhead. In the centre of the facility, stadium-style seating provides a fun place to relax and read.

A wide staircase leads to a mezzanine level, where the team placed a teen zone, adult area and media room. This upper floor connects to a landscaped terrace that sits atop a parking garage, and is used by both library visitors and apartment tenants. The building has a number of sustainable design elements, including stormwater management, energy-efficient lighting, passive ventilation and several green roofs.

The Independence Library and Apartments building was constructed as part of a city initiative that aims to co-locate housing and libraries. Spearheaded by former Chicago Mayor Rahm Emanuel, a competition was held in 2016, in which architects were chosen to design three different facilities. The other apartment-library buildings are by Perkins+Will and Skidmore, Owings & Merrill.

Founded in 1999, John Ronan Architects has completed buildings at a variety of scales. Other projects by the Chicago firm include an academic building at the Illinois Institute of Technology that is designed to have a “cloud-like appearance” and a house along Lake Michigan that features charred wood cladding and open-air courtyards.

The firm is also designing a visitor centre for Frank Lloyd Wright’s home and studio in Oak Park, Illinois. 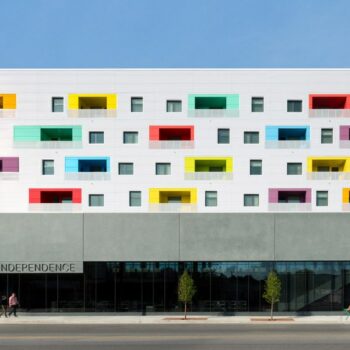 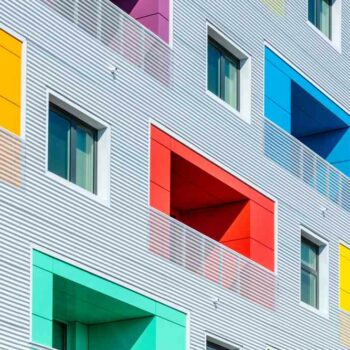