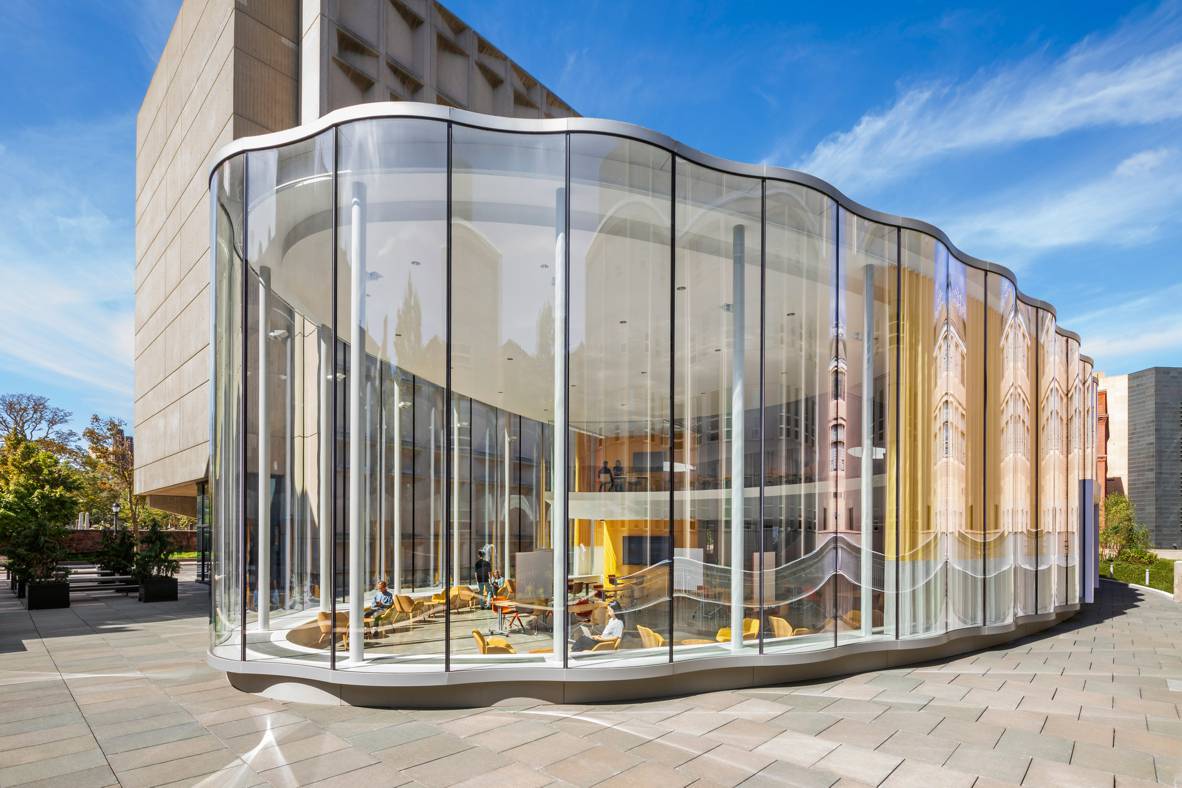 The Yale University Center for Innovative Thinking by architecture studio Weiss/Manfredi is an elliptical glass pavilion for students on the New Haven campus. New York City-based Weiss/Manfredi designed the two-storey pavilion to stand out from the brutalist and gothic-style buildings of the historic Yale University.

The pavilion was built on top of an existing laboratory in a plaza surrounded by the Becton Center, Dunham Labs and the Sheffield Sterling Strathcona Building. Set near the middle of the courtyard it has a concrete base and slim steel columns around the perimeter.

It is enclosed by glazed exterior walls, which are 22-feet high (6.7 metres) and have a gentle rippling shape. “The glass skin’s reflective and transparent quality allows the pavilion to act as a chameleon, mirroring the surroundings and campus activity by day and creating a destination imbued with luminosity at night,” said Weiss/Manfredi.

Set in a shady corner of the campus, the glass pavilion has an automated curtain that can unfurl around the perimeter when required. Open 24 hours a day, the pavilion was designed to be a “collective living room” for Yale students.

“The centre will bring together students from diverse disciplines to generate innovative solutions to real-world problems,” explained the studio. “The program, unique to the university, is based around team workshops and courses that allow students to bring their ideas to fruition.”

Desks, chairs and whiteboards are all set on wheels so they can be rolled around the smooth tiled floor to create flexible workstations for collaborative work. There are a couple of separate rooms for meetings and a conference room at one end of the building. A curving mezzanine that overlooks the lower floor is screened by more glass and contains comfy chairs so it can be used as a breakout space.

The pavilion has a green roof and the previously paved plaza surrounding it has been turned into a landscaped garden complete with storm retention tanks that collect runoff for watering the plants. Weiss/Manfredi also renovated some of the laboratory spaces below the Yale University Center for Innovative Thinking as part of the project.

Also on the campus, Yale’s student radio station has recently been revamped by architecture studio Forma, who used bright orange walls and floors to create an eye-popping studio.

Founded in 1989 by Marion Weiss and Michael Manfredi, Weiss/Manfredi’s projects include a competition-winning plan to redevelop the La Brea Tar Pits and a brick and glass architecture school for Kent State University in Ohio.