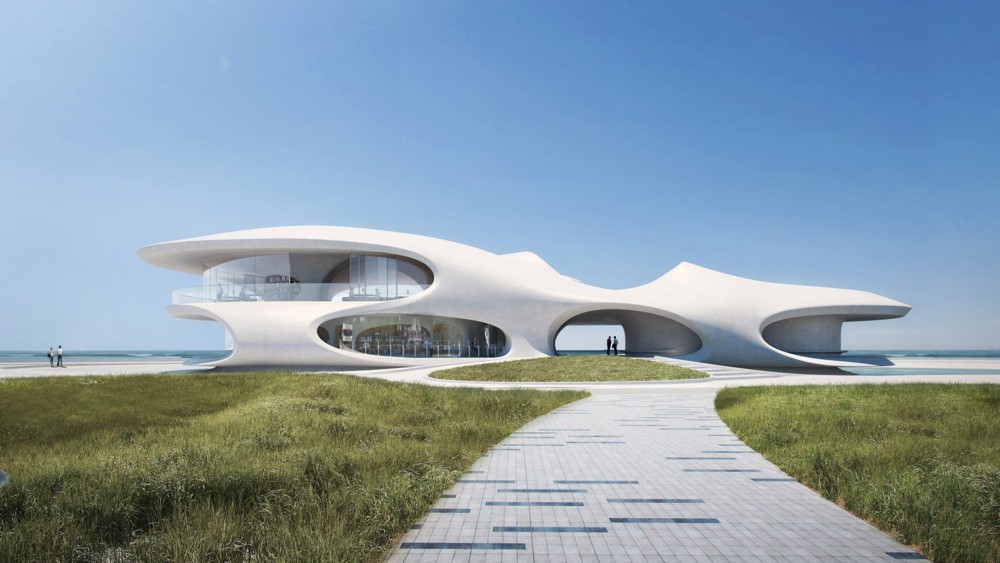 Chinese architecture studio MAD has designed a library in the city of Haikou, China that is intended “to be a wormhole that transcends time and space”. Named the Wormhole Library, the structure is currently under construction within Century Park overlooking the South China Sea in the city of Haikou, which is on the Chinese island of Hainan.

Being built as part of a rejuvenation plan to improve public space along the coastline of Haikou Bay, the curved concrete building will house a library and facilities for users of the park. The building will be split in two with a large covered foyer dividing the library from the facilities block, which will contain toilets, showers and bike storage.

The library will be built around a central, two-storey reading room that will have space for 10,000 books. A cafe, reception area, office and VIP room will also be located on the ground floor, while a tunnel-like children’s reading room and sea view reading space will be built on the floor above.

The sinuous building will be cast from white concrete within formwork that is CNC cut and 3D-printed to maintain the shape of the continuous form. Throughout the building, circular holes will be cut in the ceilings to provide light into the rooms.

According to the studio, all of the building’s electrics and plumbing will be built into the concrete form to reduce clutter inside the building. Curved sliding doors will retracted into the walls as will windows that can be opened to let the sea air circulate within the building.

The building is topped with a rooftop terrace that has views of the South China Sea, while a reflecting pool and white-sand filled area will be built on either side of it. Wormhole Library is the first in a series of seven pavilions that are going to be built along the coast of Haikou Bay as part of the rejuvenation plan.

Beijing-based architecture studio MAD was established by Ma Yansong in 2004. The studio is currently designing a culture park in Shenzhen, which will be topped by two pavilions designed to look like groups of large stones, and the Yiwu Grand Theater to look like a Chinese junk.